Diabetes is a common endocrine condition in both dogs and cats, caused by either a lack of production of insulin (Type I) or an inadequate response to insulin (Type II).

If you answered yes to any of the questions above, your dog could be Diabetic like Joe.  When his Dad noticed that he was drinking more than normal and had lost weight, Joe was brought in to Calder Vets. Joe had always been a very good eater so it was difficult to tell if he was greedier than normal or not. 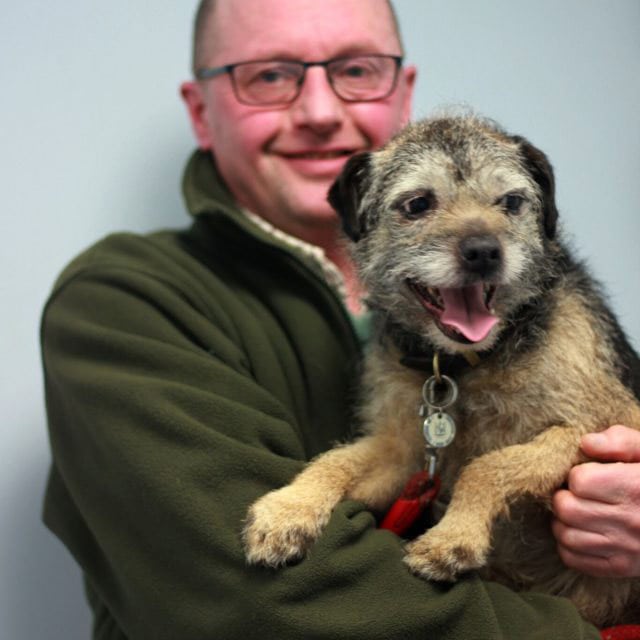 Joe had blood tests and urine samples done to measure his blood glucose level and see if he was hyperglycaemic (had high blood sugar), to quantify his fructosamine level (an average of his blood glucose over the last 2 to 3 weeks) and also to check for glucose in urine. The blood tests allowed us to rule out other problems that can cause these symptoms, such as kidney disease and Cushings disease. The tests revealed he had high blood glucose, high fructosamine and glucose in his urine. The tests all confirmed diabetes mellitus.

Diabetes is a common endocrine condition in both dogs and cats, caused by either a lack of production of insulin (Type I) or an inadequate response to insulin (Type II). Most commonly in dogs, it is Type I, insulin-dependent diabetes, which occurs when the pancreas is incapable of producing or secreting enough insulin. Therefore, dogs require insulin supplementation, in the form of injections to survive. Type II diabetes is found in cats and is due to a lack of normal response to insulin, and can be reversible.

Symptoms of Diabetes in Dogs

As well as the symptoms listed above, other indicators can include;

Normally when a dog eats, carbohydrates are broken down into glucose. A hormone called insulin is secreted by the pancreas, and is used to carry excess glucose into cells in the liver and muscles to be stored as glycogen. When energy is required later, another hormone called glucagon, is used to break down the glycogen stores and release glucose for use in the body. If a dog doesn’t produce enough insulin, or in the case of cats, cannot utilise it normally, blood sugar levels rise, causing hyperglycaemia, which is untreated, can cause many health problems. It is thought that overweight pets and female dogs are at an increased risk of developing diabetes. Some breeds are also predisposed, e.g. Schnauzers.

Some dogs may be seriously ill when first diagnosed (a condition called ketoacidosis) and will require intensive care in our hospital to regulate their blood sugar levels. Once stabilised, most dogs are controlled with once or twice daily insulin injections and a high fibre, low simple carbohydrate diet. Each dog’s needs will vary slightly depending on concurrent diseases present, such as pancreatitis and the presence of urinary tract infections. Unneutered female dogs will also need to be spayed as female sex hormones can have an effect on blood sugar levels and make control very difficult. Therapy must be tailored to the individual dog throughout their life and routine is key. It is important to always feed your dog regular meals at the same time every day in conjunction with his insulin injections, usually given 12 hours apart.

Therefore, increased blood glucose released from food, coincides with the onset of action and maximal effect of insulin. It will also help to reduce the chance of large fluctuations in blood sugar levels, that may cause it to either go too high (hyperglycaemia) or too low (hypoglycaemia). You must avoid feeding dog treats between meals which are often high in glucose. It is also important to be consistent with the amount of exercise your dog gets daily, to help maintain his blood sugar levels and weight.

The process of stabilisation can take many weeks or months. The aim is to keep blood glucose values within an acceptable range and hence reduce the symptoms. If your dog’s insulin requirement for insulin changes or he/she is given too high a dose of insulin, there is a risk of hypoglycaemia, causing symptoms including;

Food should be offered straight away if you suspect hypoglycaemia, or rub honey onto your dog’s gums if you can’t get your dog to eat. Monitoring generally involves a combination of regular urine tests (dipsticks) to check for the presence of glucose and ketones, fructosamine tests and blood glucose curves at one of our branches, which involves a series of blood glucose tests every 1-2 hours over a 12-24 hour period. The results are plotted on a graph to provide your Vet with information to ensure your dog is on a correct dose of insulin and that the insulin is lasting long enough. If your dog finds being hospitalised too stressful, there is the option of doing a home blood glucose curve and we can show you how to use a glucometer.

Joe, the Border Terrier, has responded well to his insulin treatment and his Dad is coping well with his daily injections. He has stopped drinking excessively and is no longer having accidents in the house. His appetite has returned to normal, his weight is stable and he is back to his normal bright self. Early diagnosis is vital to try to prevent secondary complications of diabetes, such as ketoacidosis, cataract formation and blindness.