Marley, a three and a half year old lop rabbit, was presented to Calder Vets by his owners who had noticed that Marley was struggling to use his back legs. Despite being unwilling to move around, Marley was bright and eating.

Careful veterinary examination did not reveal any broken bones, wounds or painful areas. However, as rabbits are prey species they notoriously hide signs of pain making the pain assessment difficult.

At this stage trauma, such as the result of an unseen fall, inflammatory disease of the joints, degenerative changes with narrowing of the spaces between the vertebra or a fracture of the spine were all considered possible causes. Marley was admitted for supportive care to ensure he was comfortable and further investigations to assess the underlying cause. Over the next 24 hours Marley's condition deteriorated: he became weak, wobbly and unable to support his weight on all four legs. Blood tests did not reveal any abnormalities. Radiographs (x-rays) were taken of Marley’s spine but did not reveal any obvious fractures. A congenital malformation was noted but this wasn’t considered the cause of his weakness.

A diagnosis of ‘Floppy Rabbit Syndrome’ was made. Floppy Rabbit Syndrome (FRS) is considered an acute neurological condition characterised by a sudden inability to hop around. The muscles of the legs and sometimes the neck are flaccid. FRS remains a poorly understood diagnosis in rabbits, with research ongoing in an attempt to identify an inciting cause. Various theories have been suggested including low blood calcium, low blood potassium, vitamin E and selenium deficiency, infection with the parasite Enecephalitozoon cuniculi and ingestion of plant or fungal toxins.

Like Marley, affected rabbits are alert and will eat and drink if food and water is provided within their reach, although supplementary syringe feeding is often necessary. Although they can urinate and defecate, care is needed to ensure that rabbits with FRS do not become soiled as they are unable to move away from the waste they produce. Therefore careful nursing is essential for these patients. As Marley started to make an improvement, his owner bought in his litter tray in the hope that the familiar ‘toilet’ would encourage him to move to reach it. By his last day in the hospital, Marley had achieved this!

The prognosis for FRS is guarded to good. Many cases recover within a week with intensive nursing care, regardless of treatments administered. Unfortunately some cases can die from respiratory failure. Some rabbits only have a single episode, whilst repeated episodes, often following a period of stress, have been reported in other cases. Since other diseases can cause similar signs, diagnostic tests including serology for the protozoan parasite Encephalitozoon cuniculi, CT/MRI scanning of the brain and spinal cord, cerebrospinal fluid analysis and electromyelography can be considered but they can are expensive.

One particular secondary concern in sick, stressed or hospitalised rabbits like Marley is the development of ‘gut stasis’, where the normal motility of the gastrointestinal tract slows or stops, resulting in painful distension of the gut, lack of appetite and reduced or absent faecal output. Left untreated, this in itself could be fatal. In order to prevent this, gastroprotectant medication, gastrointestinal motility stimulants and support feeding were all provided. The nurses diligently checked and fed Marley throughout the day and night.

As Marley was an indoor rabbit, he was strongly bonded to his owners, meaning that their dedication in visiting Marley to encourage him to eat was also an extremely important factor in his recovery. Marley was discharged four days after his initial presentation and lived a further three years, achieving celebrity status amongst the nurses who were delighted to see the loveable Marley when he came for his regular dental checks with Shona. The fact that Marley made a full recovery highlighted the importance of not giving up too soon on rabbits suffering from FRS. 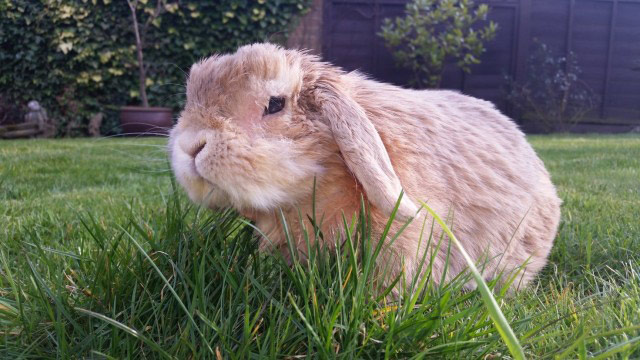 Calder Vets would like to say a sad farewell to a much-loved rabbit, Marley. Marley became something of a celebrity amongst both the vet and nursing teams at Calder Vets following his recovery from an episode of Floppy Rabbit Syndrome in 2012. During his lifetime Marley also made regular visits to the practice for ongoing management of his chronic dental disease to ensure that he was comfortable and able to chew properly (known as Progressive Syndrome of Acquired Dental Disease). Vet Shona first met Marley in January 2011 and looked after him during his visits to the vets until his passing in December 2015. Looking after Marley was a great example of team work between his caring, dedicated owners Allison and Mike and the Veterinary staff.

Rabbits can live until around 10 years old, and therefore many rabbits suffer from chronic conditions. However, once identified many of these can be managed to ensure that, like Marley, the rabbit enjoys an excellent quality of life. Sleep Well Marley.