When Bobby came in to the Penistone branch of Calder Vets for his annual booster, it was noticed that his coat was thinning on both of his flanks, there was colour dilution of his hair and it was easily epilated. It was also noted that Bobby was a little overweight and had quite a pot-bellied appearance. 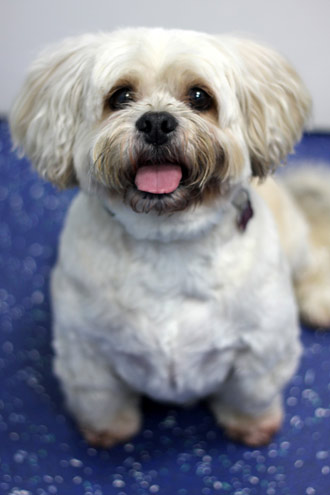 When questioned, the owner thought that Bobby was eating a bit more than normal (polyphagic) but doing plenty of exercise, without any exercise intolerance. He was however panting more, even when not exerted. Bobby lives with another dog so it was quite hard to tell, but his owner thought he was also probably drinking more (polydipsic). He had not had any vomiting and his stools were normal.

A blood sample was taken from Bobby to see if there was an endocrine or hormonal reason why he may be overweight and have a poor coat condition. His results showed high liver enzymes and a low thyroid level, but otherwise the blood tests were fairly unremarkable.

At this stage, the top two things on the list of differential diagnoses for Bobby were hypothyroidism (underactive thyroid) and hyperadrenocorticism (Cushing’s disease). Hyperadrenocorticism (Cushing’s disease) causes an excessive amount of cortisol in the body, which can have harmful effects on other organs and on the ability of the body to regulate itself.

Cortisol is produced in the adrenal glands (near the kidneys) and is production and release is controlled by a hormone called ACTH, which is itself produced by the pituitary gland in the brain. 80-85% of cases have a benign tumour of the pituitary gland, which produces large amounts of ACTH hormone, which in turn triggers the adrenals to overproduce cortisol.

The typical signs of Cushing’s are:

There are several blood and urine tests that can be performed to rule in or out Cushing’s disease. In Bobby’s case, a low dose dexamethasone suppression test was carried out. Over an 8 hour period, we took 3 blood samples, to measure his cortisol level in response to an injection of dexamethasone (steroid). Dogs that have Cushing’s disease have difficulty lowering their cortisol levels after the steroid injection. This test can also be used to differentiate between adrenal and pituitary dependent Cushing’s.

The results confirmed that Bobby had hyperadrenocorticism (Cushing’s disease). Bobby was started on treatment called Vetoryl; a drug called trilostane, which reduces the production of cortisol by the adrenal glands. Bobby has responded very well to treatment. His mum said he is brighter and perkier, his coat condition has improved and he is not as greedy as he used to be. He visits Penistone for regular checks and blood tests, and will be on treatment for the rest of his life, but the condition can be easily managed with his daily Vetoryl.