A typically energetic and inquisitive dog at seven years old, Minnie loved to run around the fields around her home and swim in the river.  But in January 2014, her owners Jo and Karen Hocken from Aberford in Leeds, noticed something wasn’t quite right. 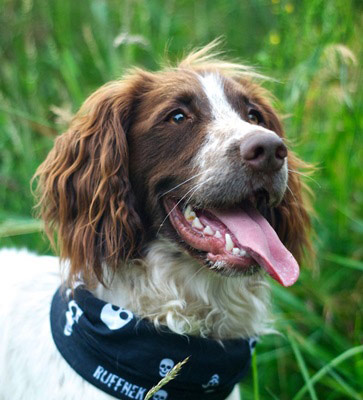 Minnie seemed more tired than usual and warning signs really began to sound when, one evening, she took herself off to the corner of the lounge and started to shake. Her owners immediately took her to the emergency vets. Jo Hocken said: The vet at the emergency surgery was very helpful and it was discovered that Minnie had a very high temperature, but with no other symptoms so she was unable to diagnose the problem.

A course of antibiotics were prescribed and Minnie appeared to return to her energetic self and was eating normally, however after she had finished the antibiotics she developed a persistent cough, which became quite worrying. We know Minnie so well and for all those months we knew that something wasn’t right.

We returned to our usual vets who checked Minnie’s heart and lungs, and all appeared to be fine.  A further course of antibiotics were prescribed but the cough did not clear up and became a mystery. We were back and forth to the vets over the months to try and fathom out the problem until an X-ray was suggested, which did not assist with diagnosing the problem either. This continued for nearly six months before our vets decided to refer us to Calder Vets in Dewsbury in June 2014. The vets there performed a CT scan which revealed a foreign object which they thought she may have swallowed.

Operating on the Dog’s Punctured Lung

Once Calder Vets discovered the object was puncturing the dog’s lung, they were clear from the start what would have to happen and that meant an operation. We were both fully informed that it would be a tricky and long procedure, and it would be a big operation for Minnie. We had mixed feelings as we knew the object had to come out but were naturally worried.

On the day of the operation the veterinary surgeon Joachim Proot explained everything that would happen, exactly what they would need to do and how Minnie would have to stay for nearly a week to ensure she was ok and did not incur any worrying wound infections post operation. It was horrible and very emotional leaving her but we felt she was in good hands. They operated, and the object transpired to be a 4inch long thorn or shoot, which Minnie had in fact inhaled not swallowed, we think through swimming in the river. The thorn had worked its way into her lung and out the other side, and was lodged between her heart and her oesophagus.

They tried to remove the thorn via her abdomen but realised they couldn't reach it from there, so had to then open her chest up and managed to eventually find it lodged near her heart. Because it had been there for so long it had grown into her internal tissue, so it was truly remarkable they managed to find it and then remove it safely. Minnie has so much character she is one of the family and is loved not only by us but by our extended family and friends. She is a joy to live with and plays a huge part in our daily lives. She is rarely not with us so when she had to stay with Calder Vets at their animal hospital in Dewsbury our home was not the same and felt empty and lifeless. Whilst recovering she received numerous get well cards and messages from neighbours, family and friends, which is testament to her popularity. From the very start Calder Vets became involved they were understanding, professional and informative.

The after care has been second to none. We received a phone call from the vet after the operation explaining everything in detail, including every step of the recovery process, and rang every morning while she remained in their care. We were also encouraged to call the veterinary nurse at any time of the day or night to check on her welfare, which was a massive comfort. Bearing in mind the scale of her operation and the 10inch line of stitches she had received (which were impressively neat), her recovery was remarkable. When we picked her up we were expecting a sorry state of a dog, but when they went to collect her from the recovery room we could hear her trying to run down the corridor with excitement, we couldn't believe what progress she had made in just a few days.  Thanks to the team at Calder Vets, Minnie is back to 100% fitness and barking her orders at us, and we love it.”

Joachim Proot, the surgeon at Calder Vets who operated on Minnie said:

We're delighted that Minnie has made a full recovery and is back to her normal self. This was complex surgery and Minnie was very lucky, if the thorn had been embedded just 2mm either side then it is most likely that she wouldn't have survived. I'm thankful that our team at Calder Vets were able to quickly diagnose the problem, take action and give Minnie her new lease of life.