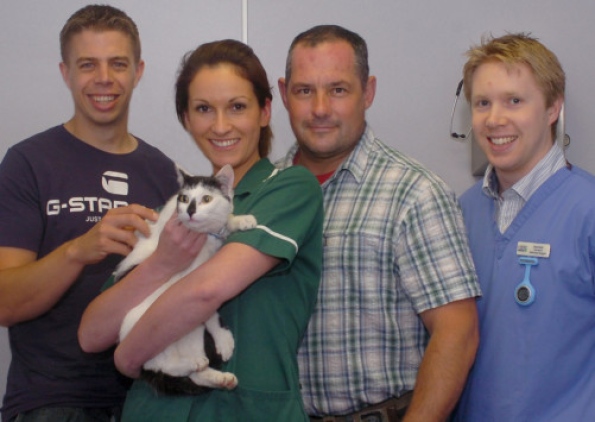 Battling poor access, they hauled the terrified cat from the water and rushed him to the vets, soaked and freezing cold.

Dewsbury-based firefighter Andrew Lindley said: “He had no strength left to get himself out. He’d had enough.”

His rescuers and staff at Calder Vets in Savile Town think the young black and white moggy could have been thrown into the canal near Forge Lane.

They are now appealing for his owners to reclaim him or for someone to offer a good home.

Andrew and his Blue Watch colleague Christopher Ridge were cycling home from a night shift when they heard noise from the canal.

“We stopped and there he was,” said Andrew, from Kettlethorpe. “We grabbed him, wrapped in a T-shirt and stuffed him in Chris’s rucksack to go to the vets’. The cat had probably been in the water a while. He was in a stretch which is hard to reach due to a concrete surround and we had to scrabble down to reach him.”

Chris, who lives in Wrenthorpe, said: “It was certainly our good deed for the day.”

Calder Vets nurse Kylie Greenwood said: “He snuggled up to us. He is really friendly.”

The cat had no injuries but was in severe shock. There were signs he had been scratching to get out of the canal.

“The fact he is neutered and wearing a nice collar suggests he has been well cared for,” said Kylie. “We don’t know just what happened, but he was most likely put into the water.”

The RSPCA will collect Tom for re-homing unless he is claimed.