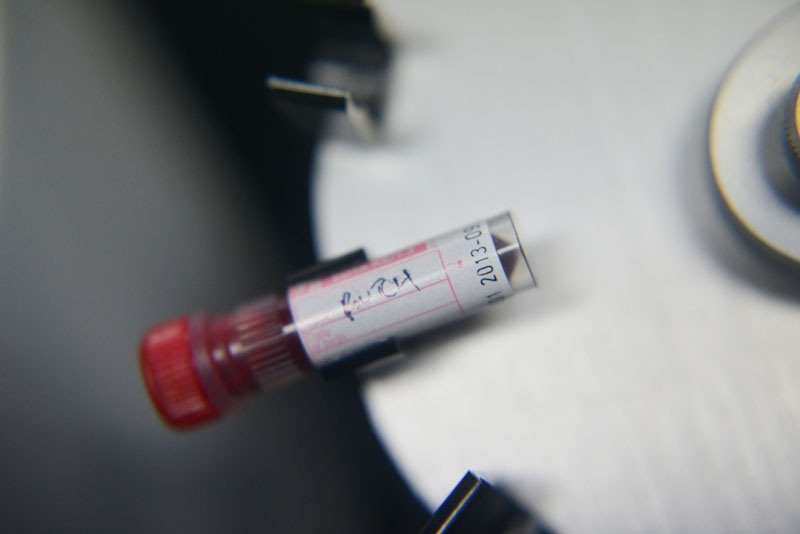 Jess was rushed into the practice one afternoon having collapsed. She had been quiet for the preceding few days and then had suddenly collapsed that morning.

Jess was very weak and pale when examined and this increased suspicion that she could be anaemic. A blood profile was run and this confirmed that Jess was severely anaemic.

Further blood samples were taken to test for some infectious diseases that can lead to anaemia in cats (FeLV, FIV, FIA) and to look for evidence of a problem with the immune system.

Jess’s anaemia was life threatening so before performing further investigations it was necessary to try and stabilise her further. For this she required a blood transfusion.

As with humans cats have different blood groups (A, B and AB) and it is very important that blood from a cat of the same blood group is transfused.

Jess was given her blood transfusion slowly overnight and by the following morning she was brighter and her PCV (a measure of her anaemia) had improved. We were then able to continue investigating her condition.

The results from the lab suggested that this was not a problem with her bone marrow. The next step was to take some radiographs and perform an ultrasound scan to assess her for signs of haemorrhage which was not present.

We were able to diagnose that Jess had immune mediated haemolytic anaemia (IMHA), where the immune system destroys the red blood cells.

In some cases this can be secondary to an infection, cancer or drug treatment but in other cases there is no identifiable reason for why the IMHA has developed (primary IMHA).

Our investigations had not revealed a secondary trigger and therefore Jess was diagnosed with primary IMHA.

Treatment for primary IMHA involves suppressing the immune system with a high dose of steroid treatment. The treatment was initiated and Jess was closely monitored over the following few days. Her blood count remained stable so she was discharged with her medication.

Over the following months Jess was regularly re-examined and the anaemia slowly corrected and the drug therapy was gradually reduced. Six months after she was diagnosed Jess is doing well.

She remains on a low dose of the corticosteroids and her PCV is remaining stable. It may be possible to stop the treatment in the future though there is a risk of recurrence with IMHA. Therefore some patients require long term treatment.