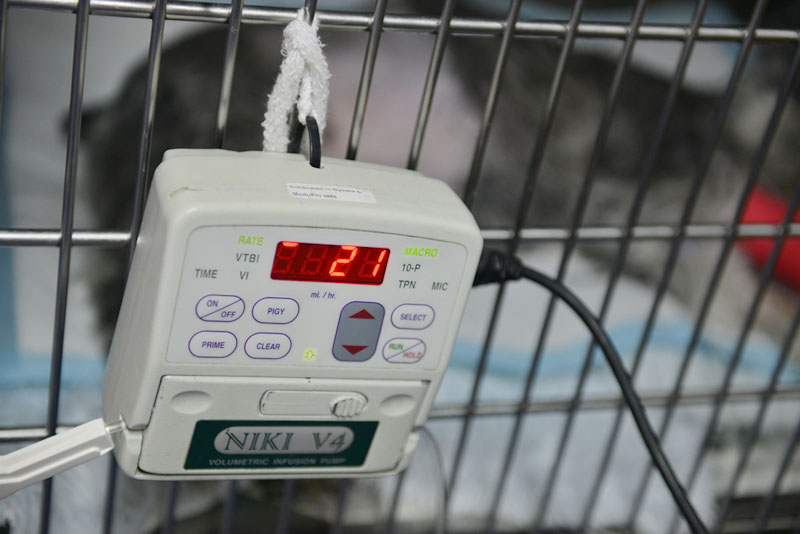 As part of the investigation we performed a blood test which revealed an increase in her kidney enzymes and abnormal electrolyte levels (an increase in her blood potassium and a reduction in her blood sodium levels). These changes on a blood profile can indicate kidney disease but can also indicate a condition called hypoadrenocorticism or Addison’s disease.

Addison’s disease is a condition of the adrenal glands. These are 2 small glands near the kidneys secreting hormones that help the body cope with stress (glucocorticoids) and control water balance (mineralocorticoids). In Addison’s disease these hormones are not produced and in most cases there is no underlying reason for this. A routine blood profile can suggest the condition but a more specific blood test (an ACTH stimulation test) is required to confirm the diagnosis.

We performed this blood test on Charlie and confirmed that she had Addison’s disease. An ultrasound scan was also performed which confirmed that the adrenal glands were small. Addison’s disease is a condition that can’t be cured but can be effectively controlled with medication. Charlie was hopitalised to correct her dehydration, treat her vomiting and to start treatment for her Addison’s.

After a couple of days Charlie was discharged with 2 medications to be given orally (prednisolone and florinef). In the initial stages Charlie was examined fairly frequently to check her progress. Her electrolyte levels were measured and the doses of the drugs were changed. It took about 3 months to get Charlie stable on the medication. It was possible to withdraw the prednisolone, just giving it at times when Charlie may be stressed (such as coming to the vets for a procedure or going to boarding kennels). Her owner reported that Charlie seemed like a puppy again after starting treatment and there have been no further episodes of collapse. Although Charlie will remain on treatment for the rest of her life she is able to live normally with her Addison’s disease.