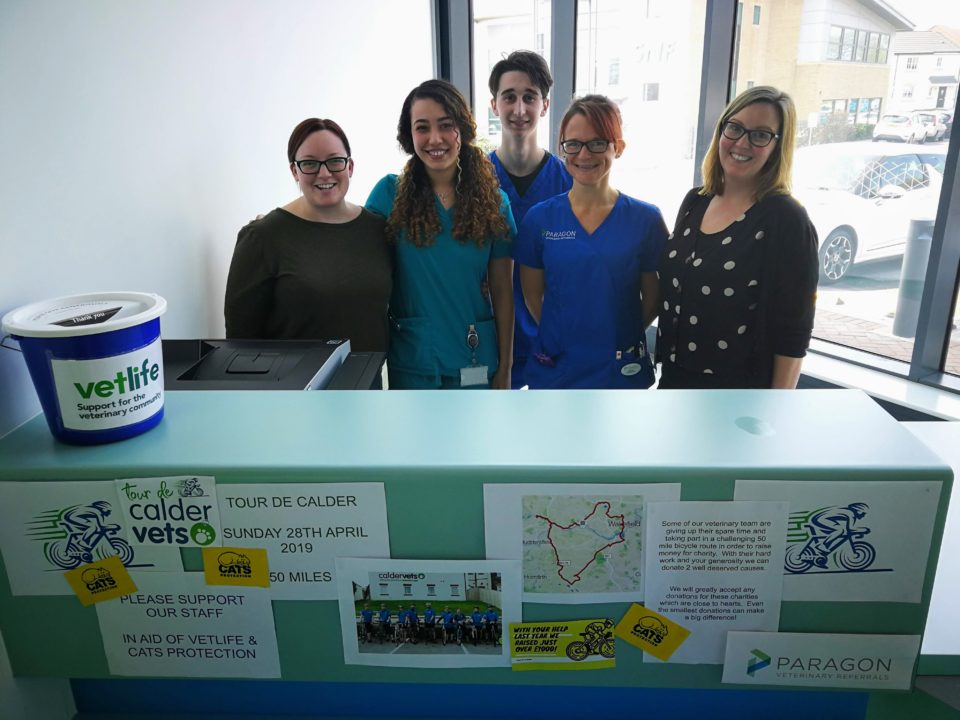 The wheels have been set in motion for a team of charity cyclists in Yorkshire as they prepare for the third Tour de Calder Vets.

Sporty staff members from Calder Vets have teamed up with colleagues from sister practice Paragon Veterinary Referrals, in Wakefield, to complete a challenging 50 mile bike ride around some of Calder’s branches.

On Sunday, April 28, the intrepid cyclists will ride between 4.5 and 50 miles on a route passing eight of Calder’s 12 practices in the county – Dewsbury, Mirfield, Brighouse, Waterloo, Denby Dale, Sandal, Wakefield and Tingley.

Last year, the team’s pedal-pushing powers raised more than £750 which they are hoping to match during this year’s challenge.

All funds raised will be split between Vetlife and Cats Protection – Calder and Paragon’s chosen charities.

Veterinary surgeon Gemma Kilby, the event’s main organiser, said: “Our Tour de Calder Vets has been enjoyed by the team so much previously that we’re doing it for the third year running.

“Unfortunately this year I won’t be cycling due to injury, but I’ll be working with the support team to help those who are taking part.

“It’s going to be a big challenge. The team is riding between 4.5 and 50 miles depending on their ability, but we’re all primed and ready to go.

“Everyone has pulled together to make this happen. It’s a real team effort for two very good causes.

“We work closely with Cats Protection, which helps the local feline community, including feral colonies, by funding their neutering.

“They work tirelessly to improve the health and wellbeing of local cats and we want to help them as much as possible to continue the great work they do.

“Vetlife is a vital charity offering professional mental health support, financial assistance, information and resources to all members of the veterinary profession.

“Mental health issues are all too common in our profession, which is why the work Vetlife does is so important.”

People can also donate at any of Calder’s branches in the region, including Paragon.