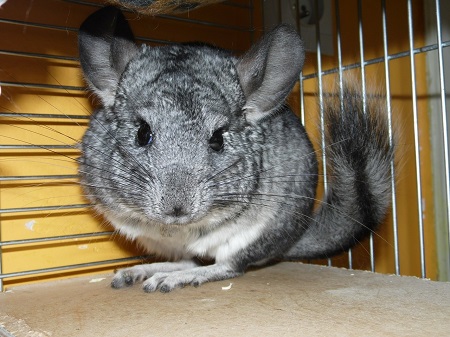 A chinchilla is back at home happily chomping away on his food once more after a leading vet practice in Yorkshire carried out an operation on his overgrown gnashers.

Calder Vets, which has 12 branches across south and west Yorkshire, treated Gizmo, who is approaching his 12th birthday, after his top teeth became overgrown causing him difficulty eating.

Gizmo’s owner noticed that he was trying to eat but after a few bites he had to stop, so they took him to Calder’s 24/7 animal hospital in Dewsbury.

He was given a general anaesthetic and the veterinary team then burred the offending incisors, which involved cutting the teeth to a manageable length.

They also rasped his lower molars as Gizmo had a small ulcer on his tongue. Rasping is a form of filing used on animals’ teeth which reshapes an overgrown tooth and also smooths the surface.

He was brought round from the anaesthetic and made such a good recovery he was able to go home the next day.

Veterinary nurse Louise Bardon said: “It is quite common for the teeth of animals such as chinchillas and rabbits to become overgrown because, unlike us, their teeth are constantly growing.

“The alignment of their teeth and diet play a huge role in ensuring they do not overgrow.

“For owners who have small animals like Gizmo, our advice is to get regular checks by the vet, look for signs of drooling or discomfort when eating, unexpected weight loss, or dropping food when eating, as all these could indicate overgrown teeth.

“Nugget style food is best to encourage the necessary ‘grinding’ of the teeth which will help to wear them down, preventing them from overgrowing. There are times when despite the correct diet their teeth can still overgrow due to misalignment, which is when regular dental check-ups are needed.

“We are delighted we were able to correct Gizmo’s teeth and send him back home to enjoy his food once again.”