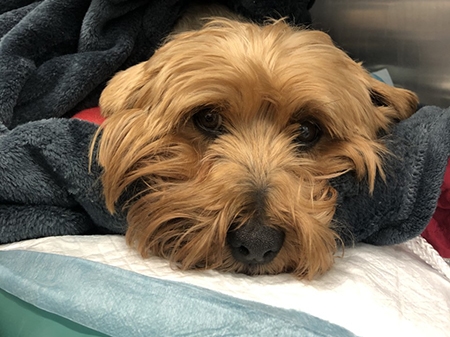 Vets at a leading practice in Yorkshire were shocked when they carried out an ultrasound on a dog and discovered a skewer impaled through one of her kidneys.

Lilly, the nine-year-old Yorkshire terrier, had shown mild gastrointestinal signs for a few weeks prior to the diagnosis at Calder Vets, which has 13 branches across south and west Yorkshire.

She had suffered from intermittent bouts of sickness and diarrhoea with mild abdominal pain but had otherwise remained bright and well.

She was brought into Calder Vets’ Dewsbury Hospital one evening after an increase in her abdominal discomfort.

Lilly was found to have a slightly high temperature so was admitted into the hospital for further tests, including an abdominal ultrasound.

Natalie McQuire, lead veterinary surgeon, said: “It was on this ultrasound scan that the stick could be seen passing through her left kidney. We were all stunned.

None of us have ever encountered something like this before.

“Lilly underwent surgery to remove the 10 centimetre stick, which was found to have passed all the way through the kidney and was sticking out from either side.

“Unfortunately, due to the skewer’s length and the damage it had caused it was not possible to save the affected kidney so this was removed at the same time.”

Lead vet Ben Lord and vet Mark Harrison, who carried out Lilly’s surgery, felt it was likely she had eaten the stick, which had then passed through her duodenum and across her abdominal cavity to its site in the kidney.

Apart from some scarring and adhesions it did not appear to have caused any lasting damage on its route through the abdomen.

Natalie added: “Lilly made a fantastic recovery from her surgery.  She was kept overnight on intravenous fluids to help support her remaining kidney before being sent home the following day.

“Her owner, Norma Mackay, was as surprised as everyone else at the findings.

“Lilly is not a typical scavenger dog and it had been four weeks since their last barbecue, which is when she must have swallowed the stick.”