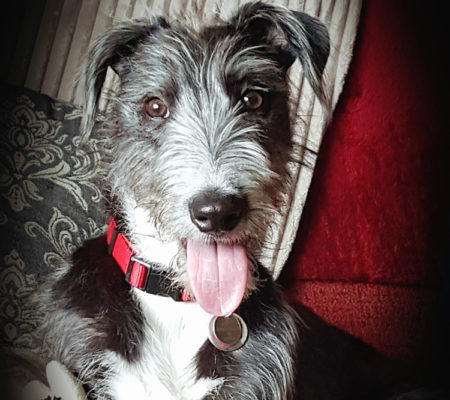 A leaping lurcher named Rio has become a worldwide internet sensation after her madcap exploits on a trampoline were captured on camera.

The 54 second video clip of the playful puppy joyously jumping and bouncing around has now been enjoyed by more than 40 million people online.

Rio, who is eight months old, belongs to Andrea Peel, who said she was absolutely thrilled the puppy’s antics had brought happiness to so many people.

She said: “After we lost our previous dog we were devastated. We rescued Rio and we instantly fell in love with her and her boundless energy and fun.

“She has brought so much joy and so many smiles into our lives, and we’re delighted she could also do that for millions of people online.”

Rio is having to put her energetic antics on hold for a while as she recovers from being spayed at Calder Vets, which has 12 branches across south and west Yorkshire.

Lead vet Natalie McQuire, who carried out the surgery, said: “Rio is a real bundle of joy who is full of energy and excitement.

“Although spaying is a routine procedure, we cannot forget that it is still abdominal surgery so patients need to rest afterwards. Rio will be having very short lead walks for up to 10 days and then hopefully will be signed off and able to gradually get back to her usual antics.

“I’m sure poor Rio will be disappointed at having to be a bit calmer for a while but her owners have done the best thing for her by getting her spayed. It is so important as it helps prevent infections of the uterus and mammary cancer, plus unwanted pups and the risks associated with giving birth to them.

“Everyone here at Calder Vets cannot wait until Rio has fully recovered and is back to bouncing about on her trampoline once more, making millions of people online smile.”