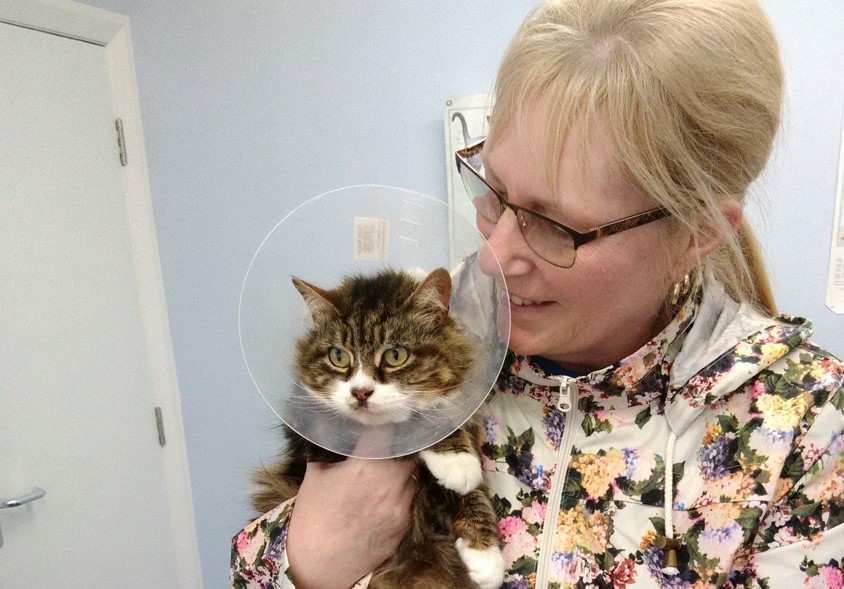 A cat owner has been reunited with her beloved pet after he turned up at the family home after being missing for nearly three years.

Little Bit, a 12-year-old tabby, went missing from his Denby Dale home just over two-and-a-half years ago and owner Steph Mellor-Smith had all but given up hope of seeing her “best friend” again.

However, Steph was left stunned when she opened her curtains and suddenly saw her missing moggy casually sitting on the window ledge.

After coaxing him in, Little Bit – who was named after being described as a little bit of fluff – was taken to Calder Vets, which has 12 practices across Yorkshire.

Calder then identified him from his microchip and treated him for ulcer-like wounds, before sending him and his overjoyed owner home again.

Little Bit’s disappearance is the latest chapter in a chequered history for the animal, including having a hip operation after he was kicked by someone in the street and then being ‘cat-napped’ from his previous home before being returned three months later.

Steph said: “He’s got an incredible history, after being kicked and injured by someone and then being taken from near our former home.

“We had not long moved to Denby Dale when he went missing. He had been cooped up for some time, so I can only imagine he got cabin fever and when he was allowed out, off he went.

“When he didn’t come home I was sick with worry because we’re a real double-act and he’s my best friend, really. I notified all the authorities at the time and called local vets to see if he’d been taken in but there was nothing.

“That was around two-and-a-half years ago and then a few weeks ago I caught a glimpse of a cat in the garden. He was sat side-on but I knew straight away it was Little Bit. I really had to coax him in but he obviously knows where his bread is buttered and he’s back to normal now, enjoying a better social life than me!”

Stephanie Woodhead, auxiliary nurse at Calder Vets in Denby Dale, helped to look after Little Bit on his return.

She said: “Steph called us and said she thought Little Bit had come home but was slightly injured, so she brought him straight in. We scanned his microchip and it takes a couple of minutes for it to come through with an ID but when we realised it was definitely him we were all over the moon.

“He had eosinoplilic plaques on his upper lips and medial right hind leg, which are like ulcers, so we treated them and gave him a full check over. He is a very healthy weight so you can tell he has been getting food during his absence.

“We have previously had a client’s cat go missing for three months before he was taken to our Mirfield practice but nearly three years is by far the longest we have known one missing for.”