Please click here to view the latest information on how to access our services
Our Tingley branch remains closed. 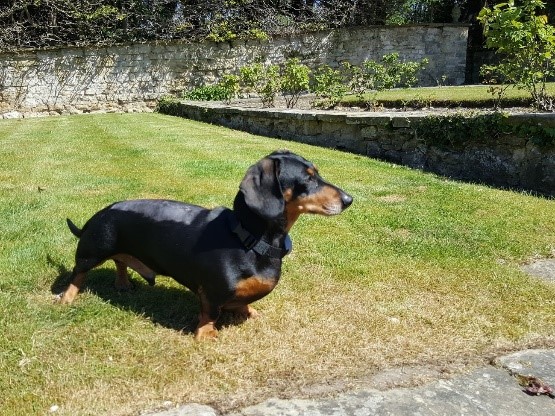 A family’s much-loved miniature dachshund is standing on his own feet after vets in Yorkshire helped him to walk again.

Seven-year-old Jasper was referred to Calder Vets’ 24-hour animal hospital in Dewsbury after losing the use of his hind legs overnight.

Amid concerns of a spinal injury which was affecting nerve signals from the feet to his brain, vets at Calder carried out an MRI scan which showed Jasper had a slipped disc, leading to referral surgeon Joachim Proot carrying out an intricate two-hour operation to correct the condition.

The next day, the friendly little dog began physio sessions and three days later he was able to walk again, much to the relief of his grateful owner Simon Howard.

Mr Howard was delighted to have Jasper home just five days after his sudden paralysis. He said: “We’d noticed Jasper was beginning to struggle with rising on his hind limbs the night before but as it was not serious we believed he had pulled a muscle during the day.

“The following morning, it was instantly apparent that he could not stand on his back legs and we rushed him to our local vet, who then referred us to Calder.

“Jasper’s a big part of our family, not only were we missing him but so were our other four dogs, which include his brother Max. We were very pleased to have him home so soon after his big operation.

“The care at Calder Vets and their quick response to diagnosing and treating Jasper was second to none and we’re very grateful for all they’ve done.”

Ian Nicholson, specialist small animal vet at Calder, initially saw Jasper. He said: “When Jasper came to us he was unable to move his back feet into the correct position when they were placed upside down on the floor, which indicated a spinal injury.

“We performed an MRI scan and that showed up the slipped disc which was causing his problems. After his operation, we showed Jasper’s owners how to continue his physiotherapy and they were thrilled to get him home.”