We are open, click here for our COVID guidelines.
Our Tingley branch remains closed. 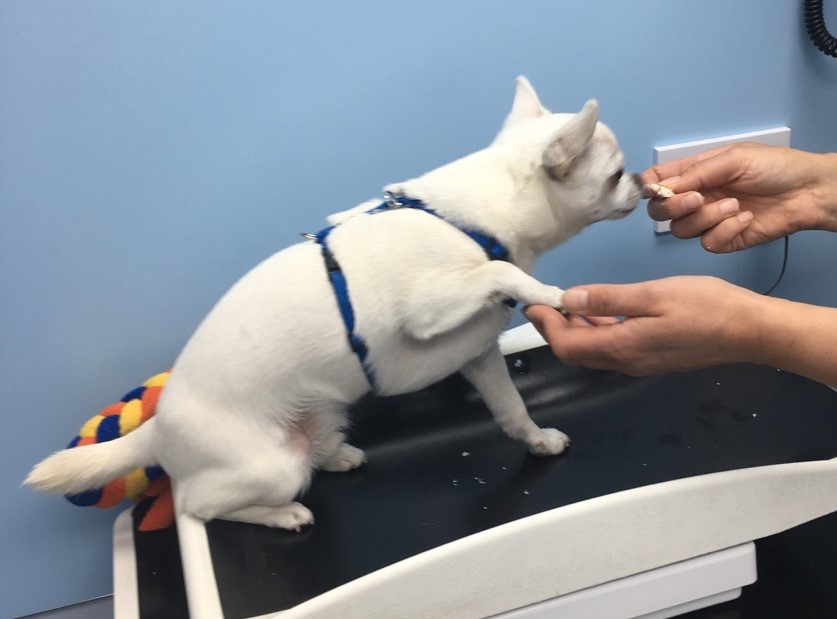 Meet Bailey, who has been coming to see Sue at our Brighouse practice to help with his fear of the vets.

Bailey used to love coming to see us until after he had an operation, which is when he became scared of his visits. Unfortunately this can happen and despite all the positive interactions before this, some dogs can often focus on the scary things that happened to them at the vets.

We think it’s a bit like the dentist can be for us humans, when you consider how many dental procedures we have in our lives versus the amount of times we visit and don’t have any dental work done, then compare this to the general fear we can have about going to the dentist – it’s not always rational.

Bailey’s owner Amy decided to help her pet with his fear and got Sue on board, and she has been making amazing progress with him.

Sue said: “Initially Bailey wouldn’t enter the premises or stand on the consultation table, but after a couple of sessions he’s able to play with me in the consult room. In his last session, he was able to climb onto the scales himself and respond to the ‘paw’ command.”

Amy added: “Bailey used to love going to the vets and having the girls make a fuss of him, even pulling me towards the door as we walked past each morning on our way to work. However, since his surgery, despite recovering quickly he had developed a fear of going to the vets and would try his best to avoid going in. I would have to carry him in to the building and if I tried to put him down on the table he would climb onto me and try to hide.

“I asked if anyone could see him to try and reassure him and since then we have been seeing Sue three times a week. At first, he wouldn’t go near her but now Bailey greets Sue, tail wagging and they play together. He’s still not sure about being handled but I’m sure that will come with time too!”

Keep up the good work Bailey and Sue!