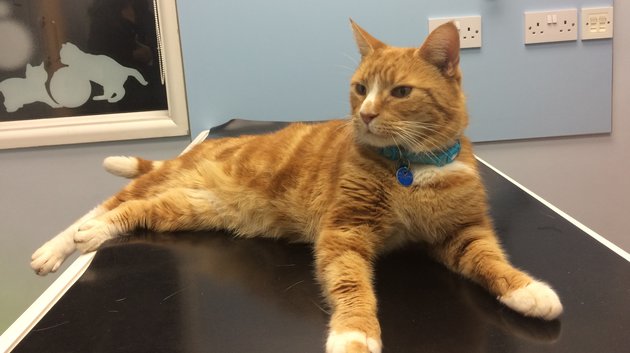 Cat diabetes is a common endocrine condition and in most cases can be diagnosed and managed successfully. Management of the condition can be complex as treatment may need to be adjusted to the individual cat as Emma experienced with her cat Ollie.

Ollie was brought in to see us earlier this year as his owner, Emma, was concerned that he was generally under the weather and may have lost a little weight. Ollie was spending a little more time indoors than usual and his coat was not in as good a condition as normal. He was still eating and drinking and going to the toilet normally.

Examination of Ollie showed he had lost over a kilogram of body weight but there were no other abnormalities found. We recommended taking a blood sample to investigate Ollie’s weight loss further. This sample showed a very high glucose (sugar) level and further tests on the blood sample confirmed the diagnosis of feline diabetes.

What is Cat Diabetes?

Cat diabetes is a condition where the pancreas does not produce enough insulin. This is a hormone that regulates the body’s blood glucose levels. Without it the glucose levels are excessively high.

What are the Symptoms of Diabetes in Cats?

Complications of Diabetes in Cats

If your cat has diabetes and it’s left untreated it can lead to a condition called ketoacidosis. This is a disturbance in the cat’s metabolism that can be fatal. Other complications of cat diabetes we see include:

While some cats respond very quickly to their medication, Ollie was a much more complicated case. He responded very poorly to his insulin and his blood glucose levels remained high. He developed secondary gastrointestinal problems with diarrhoea and further weight loss and needed multiple stays overnight at the Dewsbury hospital. He underwent additional investigations including ultrasound scans, x-rays and blood tests to see if there were any other diseases present. At one stage Ollie had lost a total of a third of his body weight and collapsed at home. He was rushed back into Dewsbury hospital and Emma was warned to expect the worse.

Fortunately, Ollie showed tremendous strength and pulled through that night. His insulin was changed to a different formulation and his intestinal problems were treated with several different medications together with a specially formulated diet. Ollie finally started to improve with his new treatment combination and was able to return home.

Ollie is now gaining weight and is back to his usual antics. He could not have done it without Emma’s dedication to his treatment and his own remarkable character.

If you recognise the symptoms of diabetes in your cat please get in touch with your local Calder Vets. One of the team will be happy to talk to you and book you in for an appointment.