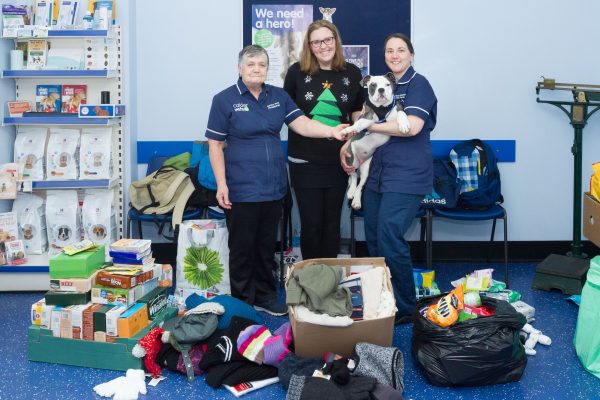 Kind-hearted staff from a Yorkshire vets have brought some festive cheer to homeless people in Huddersfield after packing 11 rucksacks with essentials and gifts to hand out around the town on Christmas Eve.

Staff from all 12 of Calder Vets’ surgeries across the county have been collecting food, drink, essential toiletries, hats and scarves for the Huddersfield Change Project (HCP), which works with homeless people in the town and neighbouring areas.

The charity’s aim is to provide people in need with a rucksack full of essentials on Christmas Eve and Calder staff have also included Christmas cards and gifts with messages of support for the recipients.

The team has also donated more than 25kg of food, treats, blankets and towels for dogs belonging to the homeless people supported by HCP, so their pets will be well fed and warm as well.

The items will be delivered to Dave Kennedy, HCP’s founder and co-ordinator, to hand out in time for Christmas.

“The response from the staff has just been amazing, so a massive pat on the back is needed for the whole team,” said Rachael.

“I first found out about the charity on Facebook in the summer and thought it would be a really nice thing to support and contribute towards.

“We also have a massive box full of pot noodles, Cup-a-Soups, porridge and tins of soup and beans which will go to their soup kitchen, along with some bags of spare hats, toiletries and food for refills.”

Looking ahead to the new year, Rachael added: “This collection is something we’d like to build on and get our vets on the streets working with homeless people’s animals over the winter months.”

For more information on the Huddersfield Change Project, visit www.facebook.com/HCPKENNO.