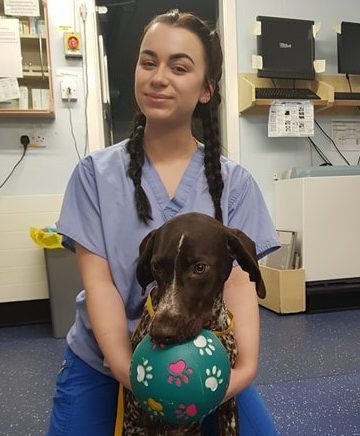 The owner of a puppy who needed an emergency procedure with a hacksaw to cut away a hard plastic ball she got stuck around her lower jaw is warning fellow dog lovers to be aware of the potential dangers their pets’ favourite toys can pose.

Helga, an eight-month-old German Pointer, became extremely distressed when she got the toy stuck in her mouth while trying to retrieve a treat from inside it.

Vets had to cut the ball apart with a hacksaw to free Helga, as even after she was sedated they were unable to remove it by hand.

Helga’s owner Kate Wright, of Brighouse, said her ordeal was an important lesson to pet owners that they need to monitor their animals when they’re playing with their toys.

It was also a traumatic experience for the Wright family’s other German Pointer, five-year-old Meeka, who became extremely distressed at the sight of her companion in pain. 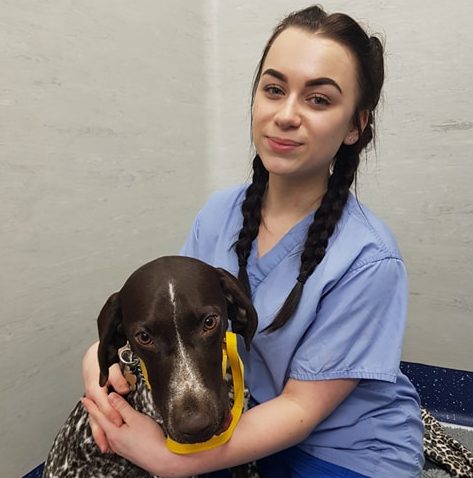 Kate, who rushed Helga to Calder Vets’ 24/7 animal hospital in Dewsbury for treatment just before midnight, said: “She was playing with the ball with Meeka and could obviously smell something inside it, so she got her teeth on the edge of it and tried to spin the disc which opens the hole in the ball.

“Instantly I could tell she was trapped. She was running around crying and bumping into things, which caused her to panic.

“I was so grateful to Calder. I have always been with them with my dogs and Helga was really well looked after.

“I think people need to be aware of the dangers some toys can pose. It was lucky that I was there, it could have been a lot worse.”

Apart from some minor abrasions and a puncture wound to her left lip, Helga was quickly back home and is no worse off for her ordeal.

Veterinary nurse Becki Smith, who helped care for Helga on the night, said: “Helga was quite distressed and tired when she arrived, so she had to be sedated for us to remove the ball from her jaw.

“Unfortunately, it was firmly stuck around her teeth so we couldn’t manipulate it by hand and had to cut it in half to remove it.

“We’re delighted to see Helga back to her best very quickly and showing no ill effects from her ordeal.”

For more information, search for Calder Vets on Facebook.