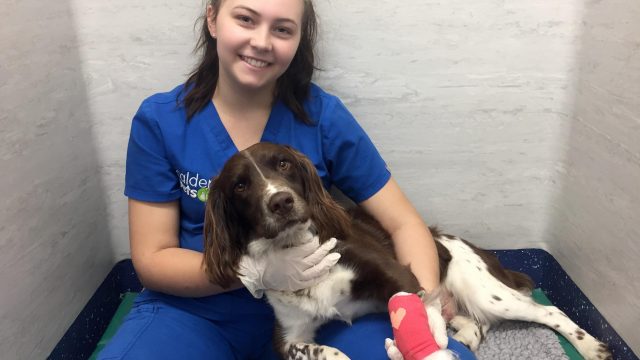 One of our vets has described the dramatic two-day battle to save a Springer Spaniel who had swallowed a pine cone and required emergency surgery to remove a large section of his intestines.

Veterinary surgeon Ben Lord revealed how two-year-old Moscow had to have surgery to remove the rotting cone along with 50cm of his intestines.

The scale of the surgery, the damage and infection caused by the cone, and the risk of developing peritonitis, meant the young spaniel remained in critical care for the next 48 hours.

Ben said the case was a timely reminder to dog owners of the ever-present dangers from swallowing foreign objects – especially at Christmas, when pine cones are popular festive decorations.

Ben, who was working with the team at Calder’s Dewsbury hospital, recalled: “Moscow was first examined by my colleague Rachael McGregor at our branch surgery in Wakefield.

“He was vomiting, lethargic and off his food and Rachel could feel a firm mass in his abdomen, consistent with a foreign body in the intestines.

“He was immediately sent to us in Dewsbury where we took some blood for analysis and started him on a drip and administered pain relief and pre-operative antibiotics.

“I performed exploratory abdominal surgery, with the assistance of fellow vet Wenda Tonkinson and we found a pine cone was stuck in Moscow’s small intestine. 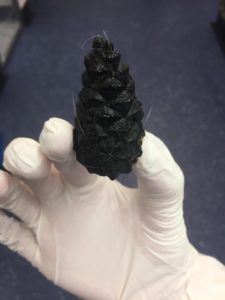 “However, as it had been there for many days, the intestines in the region had turned black and were no longer healthy or viable, so I had to remove about 50cm of them and then stitch the healthy intestines together.”

The drama was not over, though, with Moscow still at risk.

Ben, who is normally based at Calder’s Halton practice, added: “Moscow was still a critical case given the extent of the damage to his intestines, the surgery itself given how ill he was on presentation and the high risk of developing peritonitis. Because of this, he was closely monitored by the team who kept him on IV fluids, antibiotics and lots of pain relief for the next 48 hours.

“Thankfully he gradually improved, started eating again and made a full recovery, but this case shows why we are always advising dog owners about the dangers of their pets swallowing cones, stones, bulbs and all sorts of foreign objects.”